Has Home become a battle ground for equal gender relations?

We are all in this together! But are we?

According to the Indian Economic Survey 2020, 60 percent of women (between 15-59 years) in India participate in full-time household work. The labor force participation of women has reduced from 33% in 2011-12 to 25.3% in 2020. And amongst the labor force participation, 90% of women workers are engaged in the informal sector. India takes the lead in gender disparity with a 66.8% gender gap. (World Economic Forum Global Gender Gap Index 2020). Women are engaged in unpaid labor such as cooking, shopping for essentials, cleaning, children & elder care, and other unpaid activities of the household. This unpaid work is one of the biggest reasons for the gender gap in India because many women face choice constraints for the convenience of men. It is not recognised and doesn’t lead to economic independence. Many women are judged based on their quality of housework, and this becomes another burden of unpaid care work.

In the above figure, India records the second highest number of hours spent by women on unpaid work in the world.

The coronavirus outbreak has brought the entire world into a standstill mode with everyone locked inside their houses. Lockdowns have disrupted the supply of domestic help, and this has highlighted the unspoken difference in socio-economic strata of household work. Many reports have showcased the increasing burden of household work on women interfering with their professional work, leaving very little downtime for themselves. It has changed the situation to work-from-home and also work-for-home for women. The added burden might vary by class. We may see more women and girls of poor households bear the brunt of housework while amongst professional couples and rich households, there might be a propel for equal sharing of work.

Ranu Bhogal, the policy director of Oxfam India, explained that even in very enlightened households, it is women who do most of the domestic work. The men offer assistance in cleaning cars, buying groceries, or doing laundry. Men assume themselves to be more mobile than women hence they take up easier tasks that involve going out. A wide believed perception that men navigate the external world while women sit at home will take time to fade away in this slowly changing patriarchal society. The nature of gender inequality is cyclical at home with girls taught more household chores than boys.

The society believes that women are better equipped to handle houses but this is because of the difference that exists in traditional Indian social conditioning of boys and girls. It is because of these reasons that domestic help has become the right hand of Indian women at home. Maids are equalising agents in households, and thus the lockdown has brought back the weakening unequal gender roles. Such stark differences get hidden on regular days due to the daily assistance of these maids. Ashwini Deshpande, Professor of Economics at Ashoka University, has pointed out that there is a very clear gender dimension to lockdown as many Indian households have never seen an equal share of chores.

However, many experts have pointed out that over the years, men have started embracing the idea of gender equality. Surveys and studies have shown that men are changing their attitudes towards women’s careers and ambitions. In India, we cannot find Gender sensitivity in one household category or age group. It varies on the level of education, family mentality, and financial independence. On a positive front, this lockdown can be an opportunity to introduce the concept of fundamental right of gender equality at home by educating girls and boys. Otherwise, traditional gender roles will start invading our society again. We should have conversations with young boys and girls and allot an equal amount of work to change their view on gender roles. Unpaid work is not valued due to its excess supply. Valuing unpaid work should start at the domestic level within families, and its value will increase only when women join the paid labor force. The outlook on gender roles is changing, and while this change is slow, I would like to believe in our old saying of Slow and Steady wins the race. 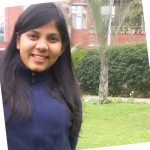 Samridhi is public policy enthusiast who believes in one step at a time approach for sustainable development. She is a graduate in Economics honours from Daulat Ram College, Delhi University and currently a Post Graduate Diploma student of Economics at the Meghnad Desai Academy of Economics, Mumbai. She was Editor-in-Chief at The Economics Society, Daulat Ram College.