Consider a market for second hand cars where the sellers are usually more informed about the quality of the car and its various features than the buyers. The car can either be a “lemon” (bad quality second-hand cars) or a “peach” (good quality second-hand cars) and assume that the buyer is willing to pay 50,000 for a lemon and 100,000 for a peach. In the absence of complete information, he makes an educated guess about the quality and attaches a probability ½ of car being a lemon and a probability of ½ of car being a peach. The price that the buyer expects to pay then, to the seller of a second-hand car whose quality is uncertain for him is 75,000 (probabilistically weighted average of 50,000 and 100,000). If the sellers’ willingness to sell peaches is for an amount higher than 75,000 the sellers won’t be willing to sell them and all the peaches will be driven out of the market leaving buyers with no choice but to buy lemons. So when market gives you lemons, make lemonade. Or in other words, the complete unravelling of market in the absence of information symmetry calls for a mechanism for efficient and more importantly an equitable dissemination of information amongst the transacting parties.

The standard neo-classical economic theory predicts that in the absence of a “market failure”, prices of commodities will reflect their true worth and subsume all the information about the society’s preference for a particular commodity along with the cost incurred by the society to produce that commodity. The market outcome will therefore be ‘efficient’ in the sense that any feasible reallocation of resources will not produce a better outcome in terms of social welfare, i.e., the size of the pie will be as large as possible. When markets fail to deliver an efficient outcome or an outcome that inadequately addresses the distributional concerns, the instinct is to argue for a shift towards government organization of that activity. For example, the implementation of the recent Prime Minister Fasal Bima Yojana (PMFBY) has come under scathing attacks from pressure groups and media for various reasons, the primary ones being – delayed payments, paltry payment of claims or rejections by the insurance companies and high premium rates imposing a burden on farmers and the state exchequer while supposedly reaping profits for the insurance companies. Based on a Public-Private Partnership model, the scheme requires farmers to pay 2-5% of the actuarial premium depending upon the type of crop (Food crops or Commercial/Horticulture crops) with the remaining burden borne by the central and state governments in equal proportion. The coverage of the scheme is primarily concerned with the loanee farmers where the loanee farmers have been mandated to insure their crops. Notwithstanding this, the castigation of government by pressure groups for allowing private insurance companies to profit at the expense of farmers continues along with the incessant demands for loan waivers. What needs to be understood is that in the presence of asymmetry in information between the transacting parties, here, the farmers and the insurance company, will nevertheless create inefficient outcomes where farmers are made either paltry payments or insurance companies opt out of the business unless the government bears a heavy expenditure on premium subsidies.

The access to bank loans of lower than 3 lakhs at low and almost uniform interest rates coupled with subsidized crop insurance seems to provide adequate resources and protection to farmers to sustain their livelihood on one hand but works to create ineffective mechanisms on the other hand that simply do not work. This is because information asymmetry creeps in through two different channels. Banks extending loans are less informed about the loanee’s risk profile than the loanee himself. Since banks can’t use interest rates to churn out risky borrowers from the non-risky ones, they use credit rationing, the practice of extending credit commensurate with the borrower’s perceived risk profile which is gauged by the size of the landholding rather than the potential crop revenue or income for the upcoming harvest season. Couple this with crop insurance and we have two classic problems emanating from information asymmetry – adverse selection and moral hazard. Banks extend relatively low credit to borrowers perceived as risky who may manage to fulfil their remaining credit demand through non-institutional sources at exorbitant rates of interest. In case of a harvest above the ‘threshold level’ (the level of yield such that, production below which insurance companies are liable to pay claims to the farmers), a majority of farmer’s income would go in payment of excessively high interest and principal to the non-institutional sources of credit. This can be due to the social stigma attached with non-repayment of loan within the farming community or due to the fear of bonded labour. Note that duration of credit is not important in this case. This may continue to happen despite restructuring of loan by the banks if the farming operation remains in unprofitable state. 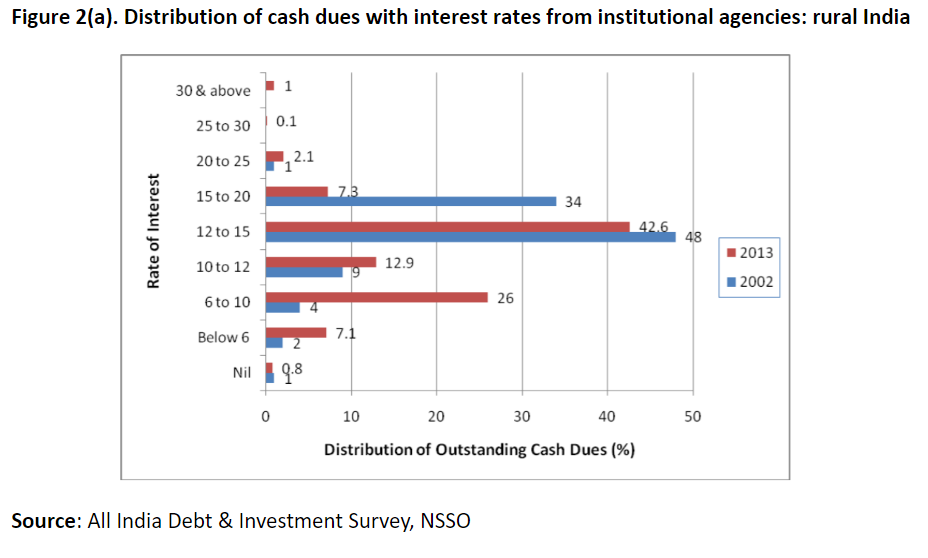 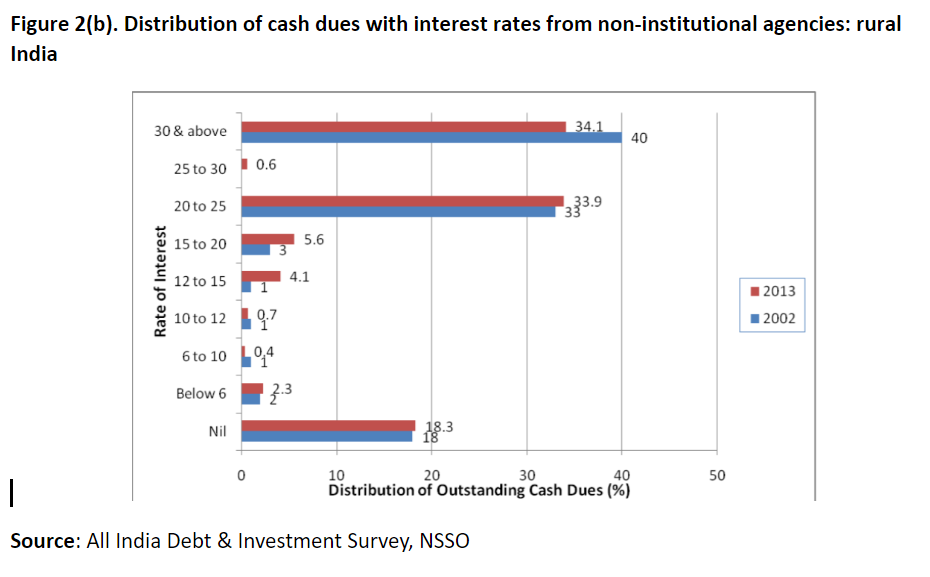 Lack of insurance services in the past have led to farming communities opting for communal insurance whereby communities pool their resources in order to help someone in case of crop loss. Such arrangements however, are equipped to deal with farm-specific risks and not the risks that affect the entire community like monsoon failure. Crop insurance as a scheme should be equipped to deal with both types of risks. Information asymmetry precludes adequate measurement and subsequent handling of both the types of risks. In case of risks affecting the entire community, it is possible that monsoon failure does not necessarily lead to crop loss yet there has been an instance in Gujarat where monsoon failure not accompanied by crop failure led the companies to make claim payment simply due to misreporting of information regarding crop yield.

Glode and Opp (2016) proved a very interesting result concerning bilateral trade in decentralized markets under asymmetric information. In a bilateral trade with two parties wishing to trade an asset in order to realize the gains from the trade whereby one agent has the market power to price the asset and the other agent possess private information about the value of the asset, the trade breaks down with positive probability when the gains to trade are small relative to underlying information symmetry – rent seeking via socially inefficient screening reduces the expected surplus from trade. Yet the authors show that presence of a moderately informed intermediary whose information quality ranks between that of the buyer and the seller can improve efficiency. By layering trade over two sequential transactions rather than one, this form of intermediation may better incentivize efficient trading behaviour by all agents involved. Furthermore, the authors provide a rationale as to why the presence of several intermediaries, each possessing a similar set of information (not necessarily identical) to that of his counterparties can improve trade outcomes. This is probably the reason why local arrangements like community insurance of informal lending have succeeded despite constant proliferation of institutional credit and insurance schemes. The trade of these assets (informal credit) take place in decentralized settings and end up providing money to the borrower and assurance to the lender. Though the exploitative practices associated with them is an issue in itself. In our example, the two parties are banks and farmers or insurance companies and farmers, where companies or banks have the power to price the asset and farmers possess the information about the true value of the asset (in terms of risk involved). In such a case, the moderately informed intermediary can either be the government or a private agent whose task is to ensure sequential transfer of asset from one party to another.

Role of technology and private players

Technological evolution has also contributed towards eliminating the problem of information asymmetry to some extent. The use of satellites in assessing the crop quality and crop yields has certainly endowed insurance companies with more information about particular areas. Use of drone/satellites could be a potential break through and ‘realistic crop insurance’ could be made possible by leveraging on technology and having minimal reliance on human intervention. Satellites and drones provide imagery data for assessing agriculture damage. Some experts in this area have suggested that there is requirement of a constellation of five satellites both using optical and microwaves technology, dedicated to crop insurance which would enable a resolution of 5-10 metre within a frequency of 5-10 days. The average cost estimated for of these satellite is Rs 400 crore (approximately) and it would require approximately Rs 2000 crore to set up this constellation. Use of drones would also go a long way in monitoring of districts and individual farms dealing with the problem of moral hazard to some extent.

Presence of private intermediaries can also help on easing out the information burden on banks and insurance companies to some extent. The pervasive problem of information asymmetry often leads to sub-optimal outcomes. The enormity of the challenge of enlarging the coverage of the scheme without creating indiscipline in either market (credit or insurance) is far larger than is usually acknowledged and its potential solution lies in artistic use of technology and private players.

Prajwal is presently a student at Sri Ram College of Commerce. In the past he has collaborated with NITI Aayog and Centre for Regional Trade, Ministry of Commerce and Industry.