In 2016, there was a landscape change in the Indian telecom sector – Reliance launched Jio which reduced the pricing and there was a massive increase in the subscribers and data consumption. Jio got more than 200 million subscribers which boosted the subscribers more than a billion. This was accompanied by a lot of smartphone offerings in the lower and mid-level price ranges, thanks to Xiaomi and Huawei brands which run on Google’s Andriod OS.

This combination had a major consequence -The next 100 million users (Bharat 2) mostly from tier 2 and tier 3 cities who prefer regional languages over English came online.

The mobile applications from silicon valley were not catering to local needs. The demographics and consumer behavior is very different in the northern and southern parts. This created a demand in the mobile app market, and now it’s filled with applications that are not based in India!

Yes, it is the Chinese companies that are very popular and have a much understanding of the market. 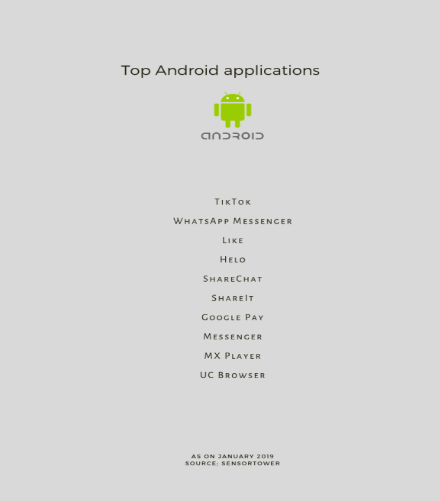 These are the top free apps in Android play store as of January 2019, among which TikTok, Helo, Like, SHAREit and UC browser are Chinese companies.

It’s intriguing how Chinese have a far better understanding of our local demands. This can be attributed to the failure of WeChat in India. WeChat was launched in 2015. They failed and closed their operations in 2016, but they understood what needed to be done. Localisation of apps!.

To have a better understanding of this scenario, we have to divide the demographics into two types: the first 100 million smartphone users who are well-versed with English and from urban. They are also the primary users of Facebook apps (Facebook, Instagram and Whatsapp), Twitter, YouTube etc. India was not a major market for these tech companies because of low revenue. There is less content or feature in these apps which are specific to India.

Then come the next 100 million (or Bharat 2) users, who prefer regional languages over English and local news over Facebook or Twitter. They are now taken care of by the Chinese companies. India is the major user base for TikTok, SHAREit, and apps like Helo are designed especially for the regional markets. ShareChat- a startup based in Bangalore is the only major Indian company in the sector and is facing stiff competition from Chinese companies.

Revenue generation: Tiktok is owned by ByteDance Inc which also owns Helo. More than 40% of subscribers are in India, but their major revenue source is US. This brings us to the question of how they will sustain in the longer run. The answer is data. Sharechat recently announced a tie-up with the local political parties for the advertising, as it understands the local environment than Facebook. It’s the same case with Chinese companies. Once they capture the market, they would have obtained a tremendous amount of data which will help in digital advertisement – a domain which is now dominated by Google and Facebook.

Data storage: These startups are mostly based in China. Though they have Indian operations, the data is shared with the Chinese counterparts to improve their algorithms to get a better understanding of the demographics. China, being an unfriendly country, can take advantage of the data available in these companies.

Content moderation: There is a contrast in the business models of Chinese and American tech startups. The traditional model is content creation, moderation and followed by user growth. These Chinese startups on the other hand, skip the first two steps with the help of algorithms/bots and move to the third stage, user growth. The content lacks moderation and is often risque. This is evident from banning of TikTok in Indonesia due to lack of content moderation. The maximum threat is a ban and closure of Indian operations but can’t be subjected to legal issues as these companies are based in China. This is a very serious issue in the wakes of incidents happening due to fake news.

It is time for Indian tech startups to learn from Chinese books in order to succeed and there is also a need for strong IT laws.